A fraction of applicants start placements

The government launched its youth employment Scheme last September as part of their ‘Plan for Jobs’ worth £2bn, but lockdown has delayed Kickstart.  The scheme aims to provide fully subsidised, six month job placements for 16 – 24 year olds, plus set-up costs, training and support to help young employees move into sustained employment.

Since lockdown has delayed Kickstart, only 1,868 young people have begun their placements as of 15 January 2021, according to the Department of Work Pensions (DWP).

The Chancellor insists that the government has moved at an “enormous pace” to set up the programme, which aims to help young people at risk of long-term unemployment, but admits lockdown has delayed Kickstart.

The scheme claims to have created 120,000 temporary jobs to date, Chancellor Rishi Sunak told the BBC that coronavirus restrictions were making it harder for more young people to get started. However, he expected the number to rise once restrictions are lifted. Mr Sunak says “Obviously because of the lockdowns and restrictions, that hampers businesses’ ability to bring people into work.”

“What we can look forward to, as the restrictions ease, is more of these young people starting those placements.”

“I’ve always said my priority through this crisis is to protect, support and create as many jobs as possible, and young people in particular have been at the forefront of my mind,” said Mr Sunak.

“We know that they’re most likely to work in affected sectors, they’re twice as likely to be furloughed, and the ones leaving college are entering a really difficult labour market.”

As part of the Kickstart Scheme, the government pays the successful applicants National Minimum Wage for a six-month period, at 25 hours per week. A further £1,500 grant is available per placement to help cover setup costs and assist in the development of employability skills. The current £2bn budget allows for around 250,000 roles.

In 2020 more than 700,000 young people are estimated to have left education and entered the job market. Yet since March, when the UK’s full lockdown was introduced, a quarter of a million more people aged under 25 have been claiming unemployment benefits.

Chancellor Rishi Sunak said: ‘This isn’t just about kickstarting our country’s economy – it is an opportunity to kickstart the careers of thousands of young people who could otherwise be left behind as a result of the pandemic.

Young people are among the hardest hit by a fall in their income due to lockdown measures because a larger percentage of their money is spent on essentials, according to ONS. With little in savings and less chance to cut spending, the under-30s would be hit hardest by this, says the Office for National Statistics (ONS) which has calculated the effect of the coronavirus outbreak on household spending.

It found that a typical household in the UK normally spent an average of £182 a week on activities, such as travel, holidays and meals out, that have been mostly ruled out under health guidance during the virus outbreak. This is equivalent to 22% of a usual weekly budget of £831.

Many households have been saving that money instead or using it to cover any loss of income. Thousands of people have lost their jobs and millions have received only 80% of their usual wages as they have been furloughed. Over 7.5 million people had been furloughed in the UK by the end of May, while another 2.5 million self-employed workers have applied for grants to cover their losses.

History shows that school leavers are usually hardest hit financially following a recession. Many suffer longer spells of unemployment, and slower pay rises, than people with degrees. Kathleen Henehan, a research analyst at the Resolution Foundation, says many graduates “traded down” into jobs in retail, hotels and the travel industry during the last financial crisis. This forced some school leavers into part-time work and jobs where they were less likely to be promoted quickly. But Ms Henehan says many of these sectors are now shut down, leaving everyone with fewer options. “In other words, the first rung of the employment ladder looks to be

broken,” she says. Furthermore this stalemate exacerbates the already huge number of young people unable to move out of their parental homes.

Even though more than 600 gateways have been approved, in addition to how lockdown has delayed Kickstart, small businesses have been finding the process slow and difficult.

Craig Beaumont, chief of external affairs at the Federation of Small Businesses (FSB) says: “There is now a backlog of cases of people who’ve been appointed through intermediaries, who’ve not been able to access that work yet. So we need a real focus from the government to clear that.”

It’s unclear whether Mr Sunak will extend the scheme due to these issues, but he has left the possibility open so far.

Employer applications must be for a minimum of 30 job placements. However businesses which are only able to offer one or two job placements can partner up with other organisations, such as similar employers, local authorities, trade bodies or registered charities, to reach the minimum number. The intermediary applying on behalf of a group of employers is then eligible for £300 of funding to support with the associated administrative costs of bringing together these employers.

For example a Local Authority or Chamber of Commerce could produce the bid for 30 or more placements on behalf of several businesses to fulfil the minimum quota of thirty placements. This aims to make the process easier and less labour intensive for smaller companies who only want to hire one or two Kickstarters.

Young people can find out more about the Kickstart Scheme at the jobhelp site. The Chancellor has set out more details on how the[...] 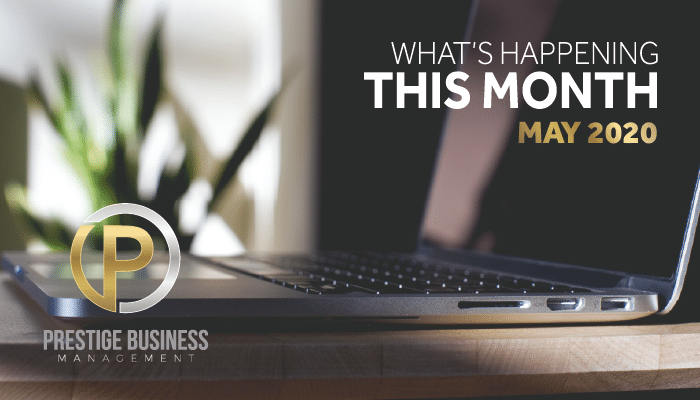 Welcome to May 2020 News Update from Prestige Business Management